When I’ve received the picture of Tailor, I’ve felt chills. I was hit by his so intense and deep look. This horse must have been very strong, magnetic, charismatic & so kind! I couldn’t wait to do his portrait.

When I was in front of my easel with the picture reference of Taylor close to me & with my pencil dancing on the paper, I was so concentrated that I felt a connection with him. That kind who let me feel a bit with him, it was a feeling of peace.

If I tell you this now it’s because it’s not the first time it happens to me these last months. I created 3 portraits of passed away horses and I felt the same peaces and strong energy each time that let me feel a huge sensation of love.

I know that for the owners it can be a hard time, for me, I created these portraits in a joy that I can’t describe & I imagine that the painting hold and keep this energy.

It’s sprang from the sheet in no time. Sucked up by the ink, swallowed by the white of the support, gulped down in the spiral of the black pencil, this horse’s sprang as much from me as from itself. He caught me off guard, but I reacted quickly, barely giving me time to think that he was already there, standing in front of me.

From the front, as if pricked up against me and against himself. In this battle, no one has won or lost. It didn’t last long, but it allowed me to give birth to him.

When the sheet was still white, however, another internal battle was fought. That one of the first impulse, of “but where am I going to with him”? The drawing finished, he was already facing me from its full height, I was intimidated, as if already floored.

And it is precisely timidly that I launched into color. He turned around, refused. I was on the verge of giving up but he challenged me so hard that I all let go.

The ink is gone from one go, the brush followed. Everything is gone so fast. But it was intense and good. He challenged me to bring out the best from me. I didn’t know it in the moment. It was once the battle ended, the weapons laid down, that he looked at me from the top and showed me how he was so proud of me, of him!

I immediately loved him. After all, we had been so close to each other.

I can say now with a hindsight of few months that this painting was a turn for my color palette.

I’ve made this painting for the last challenge of the 2019 year with @paardverzameld. The subject was Whistlejacket from George Stubbs. Create our Whistlejacket with our style, our sensibility.

For me it was obvious, I focused on the eye, head and the neck. I wanted to focused the observer look on this expressive part. Without neglecting the strong global attitude, the level of energy emanating from the entire body posture.

Even if it was not my usual colors, the idea was to keep the ambiance of the original, warm and sweet. So I’ve decided to try a new range of colors that was not mine: earthy green and something close to brown-orangish.

Quickly I found myself out very at ease with this earthy tones. I confess that I hesitated to add a blue… yeah I know habits are strong!

After that painting, I used more warm tones and less blues. Until removing blue in 4 very recent paintings! If you know me well… you know that it’s kind of a miracle!

For me, it’s like this horse taking a turn galloping… my time flies. Sometimes I’m wondering if they were not wrong during the process of my conception with my feel of the time. For sure they missed something! An essential ingredient maybe. Or a very small one. All around me goes too fast. I need time, maybe more than others, I don’t know, to be sure to be really here at the present moment. Not that I’m someone slow but it’s like my brain needs more time to sens the world around him.

It a big contrast with my horses who are always in motion! Maybe I run through them to try to be more connected to the world time?

This painting is about a shaman horse that we all met one day. The one that given us all his love, his compassion, his magical side. That kind of horse with a strong calm and magnetic power deep inside. The one with we feel invulnerable. I’m sure you know what I mean.

My model is the horse of @creativeplenitude named Shogun (love his name… 😍) and in him, even if I don’t know him personally, I think and feel that he have a big presence, a natural force that one we could bow down to him every morning to glorify his being.

I’ve a shaman horse in my life named « Moumou » and I’ve found the same energy in him. Moumou is my friend’s horse, a special mare in my heart ❤️ .

And you? Do you have a shaman horse in your life?

From time to time, I’m like hit by divine grace. The subject pop up in my mind from nowhere, I work on the artwork directly without asking myself one hundred questions, all flow naturally and I finish it in a record time.

The divine grace I tell you!
This one was done in this mood.

It can be interpreted in many ways but I give you mine. I see one horse moving towards the spectator from the left to the right. He changes his attitude from a not focused position, to like he was surprised to see me, to finally be intrigued and curious enough to come and see me. Maybe I called him by the way?

And you? How does this drawing speak to you?

I wanted to come back on this black and white painting. Of course I have to talk about the technique which is intrinsically connected to the meaning. I’ve worked on the global shape before the line here. As a moving horse, it reinforce this idea of movement. His shapes merge and are blurred because of the speed.

But not enough to pass through his look because he is totally connected with the spectator, focused on him, on us. Maybe he want us to move, to do something (and this could be taken literally or… not!), he calls us to be part of something. For sure he’s never in the judgment but in an open curiosity, a unconditional love. While the b&w allows to keep the essential with a big and beautiful contrasts with deep greys like I love.

THE CAROUSEL OF LIFE

All started with an art challenge which was to interpret the carousel horse. The painting has been exhibited with some 50 others in the Haras of St Lô in Normandy, France.

It was really a challenge for me, not to say a struggle. What can I do with that? First it was a very good occasion to play with colors. Then I wanted something very energetic, as usual you would say. With that in mind, I started to paint and let go with the rest…

This carousel is the life. Colored, not too defined, in motion, free but framed. The life like cycles which go round and round endlessly or almost until the end of the tour or the next one. I made an allegory of life!

« The Carousel »
acrylic painting on canvas

Painting created for the challenge of the month with the Paard Verzameld Collective. Far away from subjects I usually approach, it nevertheless spoke to me.

I wanted a foal from my mare at the time and this event marked me as I’ve attended the birth. It’s a mix of sensations that are both very beautiful and very terrifying. I was excited and very stressed. Afraid that things will go wrong, afraid that the foal will not survive, that there will have some problem. And at the same time, fascinated by the life to come, the pain of my mare who was spinning in her box, blew, lay down, got up… the silence that reigned, I think we all murmured to not disturb this sacred moment.

And then a tip of a nose appeared, then the forelegs and finally this already huge but so frail body. A filly!

This painting is finally all these emotions at once with the idea of ​​protection no matter what. The foal sticking to its mother, at all cost. He allows himself a look elsewhere while the mother is all in her concentration.

END_OF_DOCUMENT_TOKEN_TO_BE_REPLACED 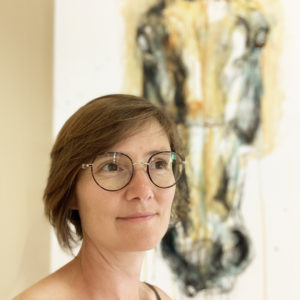 All artwork is the sole property of Bénédicte Gelé and is held under copyright (even after purchase following the copyright). The images, artwork, and contents of this website may not be copied, collected, or used for personal or professional gain without the written permission from Bénédicte Gelé. All images of artwork, sold or otherwise, are retained by Bénédicte Gelé.